The longest graphic in the history of my career is embedded below, some mobile devices may not properly render.

As the Crowd Economy Rises, Brands Seek to Collaborate
We’ve been tracking corporations in the Collaborative Economy, and released version 1.0 in April, 2014. Now, as we approach the Catalyst Companies members-summit in NY next week, we’ll be dissecting and analyzing the different deployments large companies are rolling out to participate in sharing, marketplaces, as well as co-innovation with makers. The scope? This collaborative or crowd based economy continues to rise (study, and daily numbers), and therefore corporations are adapting their business models to adjust to this peer-to-peer commerce movement.

Below Graphic: Frequency of Deployments
Since our initial tracking in Feb 2013, the frequency continues to increase. Since April 2014, we’ve found 27 new case examples, some that were before April 2014, but most were after. We’ve updated the following frequency chart to show the consistent deployment. It appears March was a slow month in terms of deployment (we do see a lot of conferences that month) and we saw a heap of deployments in August, which were due to Uber’s API partnership with several brands. We only counted the large brands like United, Hyatt, and Starbucks for the Uber API deal, as some of the others were smaller startups. 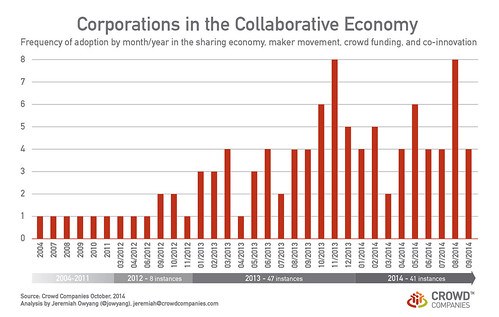 Below Graphic: Timeline Shows Each Deployment
The below timeline contains many of the deals, partnerships, deployments of corporations in the collaborative economy, using the same data set used in the above frequency chart. A great deal of these deployments are partnerships with startups, but we’re seeing many companies launch their own initiatives, which is a signal of corporations starting to invest more in these programs. There’s over 30 deployments in 2014 only, and most are partnerships, aside from Verizon launching a sharing service, starting with cars, and Walmart enabling game exchange.

The Future? Tracking will be Challenging as APIs Accelerate Exponential Adoption
It is my assumption that it will be nearly impossible to track this in just a few quarters. Since Uber has launched an API, expect Lyft and Airbnb to follow suit –resulting in Facebook-app-platform like adoption across the industry.