Respondents in the largest study in the new peer-to-peer economy reported that they plan to double usage in next 12 months. Brands must develop a strategy in this new market and avoid being bypassed from peer-to-peer economic models. 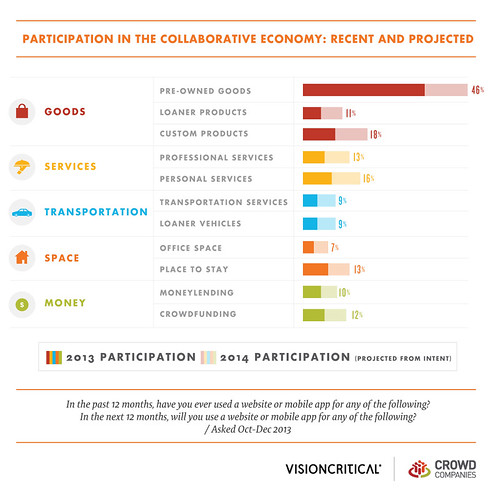 Read the full report which surveyed over 90,000 people: Sharing is the New Buying
This post is a section of a March 2013 report on the collaborative economy, in which I partnered with Vision Critical, titled, “Sharing is the new buying.” You can download the whole report and read the coverage by Fast Company: “The Collaborative Economy Is Exploding, and Brands That Ignore It Are Out of Luck.” We asked thousands of respondents about their past usage (the dark colored bars) and their intent to use over the next 12 months (the light colored bars), helping us to forecast growth. The purpose of this post is to drive deeper into one of the key findings, the forecast, here’s what we found:

New market opportunities for innovative companies that move now in the early phases of market. The Collaborative Economy is a generally new market where the majority of tech startups have been around less than five years. This provides unique opportunities for brands that want to leverage the movement to their benefit and that of those participating. Get ready, as the economy starts to shift to crowd-based business models. You can alter your business model to leverage this movement (see this storyboard on the business model shift required, see this timeline of brand examples, peruse the body of knowledge on this topic). If you’re a large company, contact me to discover how Catalyst Companies council can help you to learn more, then move to action.