Brands On the Rise In the Collaborative Economy 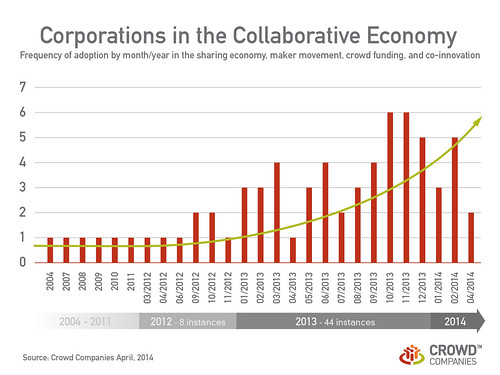 The above frequency chart (up till April 2nd, 2014) shows the instances of corporations who’ve deployed in the Collaborative Economy, based on this growing list.

The Collaborative Economy Empowers Peer 2 Peer Commerce.
I’ve written a fair amount about corporations in the Collaborative Economy, and have even started an association for large companies, called Catalyst Companies. , so tracking this space is not just a passion, but core to my work. In a future post, I’ll list out the specific instances in a timeline, so you can further see how companies are moving into this space. 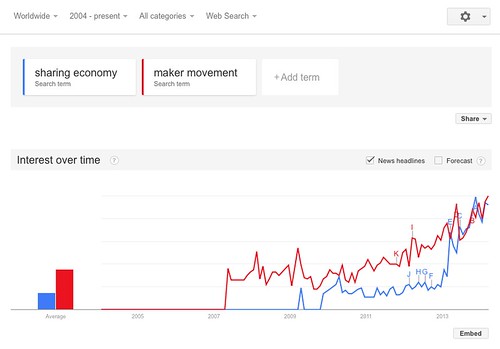 Above: Google Insights, which tracks how people are searching for terms, indicates a rapid rise in people searching for the terms sharing economy and maker movement, the two key trends in the collaborative economy movement which will trigger brands to follow the action. See the live graph.

Summary: Companies will increase partnerships with the empowered crowd
The first phase of sharing was social media. People created media and shared it, bypassing corporate-created content. In the second phase, the Collaborative Economy, people are creating products and sharing them without having to buy from companies. Read the full report on their behavior change. Companies must adjust their business model to partner with the empowered crowd.

Thank you, Vlad and Julie G., for your help in production and research. Thanks to Lisa Gansky, Fred Neil, Alexandra Samuel, Terry Young, Angus Nelson, and Vivian Wang for your insights.